A survey carried out in April 2014 by Kwik Fit and reported by the Telegraph asked over 2000 motorists of some of their biggest peeves when on the roads. Previously the winner, tailgating other drivers, had topped the charts but this year it had been resigned to second. The winner was an illegal and more common complaint in the form of using the mobile phone whilst driving.

Now it’s illegal it seems that more people go out of their way to drive and conceal the use of their phone. This week there has been more controversy as people completely take their eyes off the road to concentrate on texting and even more worryingly, social media as they drive. 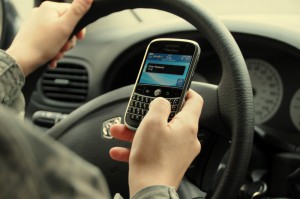 Understandably when an accident is caused or a violation of the road is committed by someone using their mobile it can infuriate those on the receiving end. It’s said you are four times more likely to have an accident if using your mobile phone whilst driving according the Think! campaign regarding mobile phones.

The Think! campaign also makes it clear that it is illegal to use your mobile phone when driving on the road even if at traffic lights, in a traffic jam or in a car park, the latter being the most surprising one for most drivers.

The full top 10 in habits are here:

This is a shift from a similar survey carried out in 2012 by Confused.com which found that back seat drivers are motorists biggest pet hates. Their results fed back that over two thirds of drivers had received ‘unwanted’ advice from passengers, and in almost half of those their partners were to blame.

When we search the internet looking for more pet hates we find plenty to look at. Do you dread the tailbacks when it’s a Bank Holiday and you try and get anywhere? The inevitable turning of a corner when you’re in a rush and being stuck behind a tractor or someone unsure of their route towing a trailer?

In the last year it has been made possible for on the spot fines to be handed out for drivers who hog the middle lane, tailgate other drivers and those who insist on cutting up other drivers. All of which are infuriating for other drivers and also very dangerous when you consider the consequences.